Fortnite offers us multiplayer online battle royale in which 100 players will engage in fierce battles for survival until only one winner remains. It is a mobile adaptation of Epic Games’ game in which both the setting and the game system remain fully intact.

The main novelty over other Battle Royale is the ability to build buildings on the game’s terrain to use as cover, so in addition to finding weapons and keeping an eye on ourselves, we’ll need to produce resources to build walls and ramps. . In addition, we will have to deal with an invisible barrier that tightens every few minutes and that forces us to constantly move.

The Android version of Fortnite uses Unreal Engine 4, so on a visual level it remains virtually the same as the PC and console versions. Even the business model is the same, the game is completely free, except for some aesthetic improvements that we can get through in-app purchases. In fact, from Epic Games they promised crossplay between versions, so we can participate in PvP battles between PC, PS4, Xbox One, iOS and Android users.

Fortnite is one of the most successful games of 2018, and its Android version only increases the popularity of this game around the world. 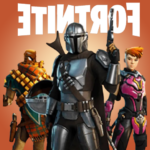